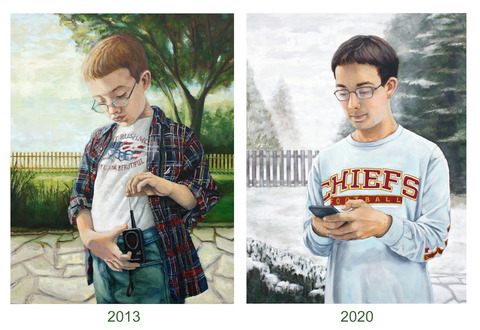 Henry Mindrup was diagnosed with NF when he was four months old due to the multiple cafe au lait spots all over his body. His NF results from a spontaneous gene mutation. He has fine motor skill delays, executive function disorder, low muscle tone, balance and coordination problems and ADHD. At two years old, a tumor was found on his left optic nerve and he has been seeing a neuro-opthamologist since that time to have it monitored. Small neurofibromas grow on his chest and near his spine as well as a plexiform on his back. Continued findings of abnormalities in his brain MRI scans are indicative of several brain tumors. He had brain tumor surgery in 2019 to reduce the size of a thalamic brain tumor that was threatening function on the left side of his body.

2013: Henry, who is ten years old, has wanted to be a weatherman since the age of four. He is proud to live in the “tornado alley” of the midwest, but would prefer to live on the east coast as an adult. Henry believes reporting on east coast hurricanes to be far more fascinating than relaying the typical tornado damage of the midwest. He checks the forecast daily, has an internal/external weather gauge, weather radios located on every level and a pocket weather alert system. He is a resilient kid and never complains about all of the medical exams, minor surgeries and appointments.

2020: Henry, who is sixteen years old and wants to study meteorology. He checks the forecast daily and is the family's weatherman. He is a resilient teen and never complains about all of the medical exams, minor surgeries and appointments.
Paintings
Loading...