RACHEL MINDRUP
RACHEL MINDRUP
Many Faces of Neurofibromatosis (NF) > NF1 ~ Portraits > Oil Portraits NF1 (United States)
These documentary styled paintings are all done with the assistance of those portrayed coordinating their own photo shoots and celebrating their vocations or hobbies. Together we work on how the portrait should be handled. Each participant writes his or her own biography and ends it with a positive note for all of us to ponder and live by!  Please view the entire collection at: http://www.facebook.com/ManyFacesNF 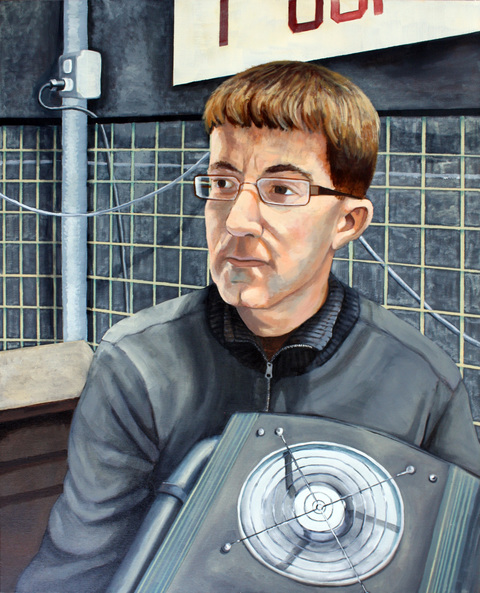 John was diagnosed with neurofibromatosis (NF1) at birth and is the only one of his parent’s three children to have it. He inherited it from his mother, and she from her father. As John went through grade school, it was discovered that he required an exceptionally long time to complete his homework. His learning disability, though perhaps mild, has been present enough that it has always affected him through school, college, and in his working days, all leading to social and career shortcomings. John has a somewhat slower processing speed, trouble learning and remembering new information, and trouble organizing and verbalizing his thoughts. Neuropsychological evaluations have noted findings consistent with diagnosis of a learning disorder.

In 2005, an MRI revealed a small cystic lesion, likely a pilocytic astrocytoma, in the pons of the brainstem. Though seemingly asymptomatic for years, it warranted follow-up MRIs every 6 to 12 months. Each scan showed about the same as the previous one until early 2013. His neuro-oncologist, Dr. Paul Moots, prescribed two different types of chemotherapy pills that year, followed by radiation treatments in Spring 2014. Nevertheless, the cyst continued to expand and by now was compressing onto the brainstem. It was around this time that John began having problems with his balance and difficulty walking. A sensation of tingling numbness that started in his right fingers slowly worked its way up further into his hand; then by late 2014 his right arm, leg, and foot too. A simple task such as picking-up an object or buttoning a shirt became a challenge. His handwriting was now atrocious. He was also beginning to experience double vision.

John had two craniotomies at Vanderbilt in Spring 2015 to remove the pontine cyst; what his neurosurgeon would describe as “an incredibly complex neurosurgical problem”. This was followed by an intense headache which prompted a third hospital stay and a diagnosis of meningitis.

For the past 15 years or so, John has volunteered with a local community theater, the Oak Ridge Playhouse. His experience includes over 40 productions, working backstage in any one of a variety of positions: stage manager, assistant stage manager, follow spotlight, light board operator, deck crew, and the props team. John’s favorite position for musical productions is operating one of the spotlights in the theater’s catwalk. From this somewhat-private balcony vantage point, he can contribute directly to the show with the added benefit of viewing the show. He is a self-described “spotlight hog” -only not in the light, but behind it.
Oil Portraits NF1 (United States)
Loading...