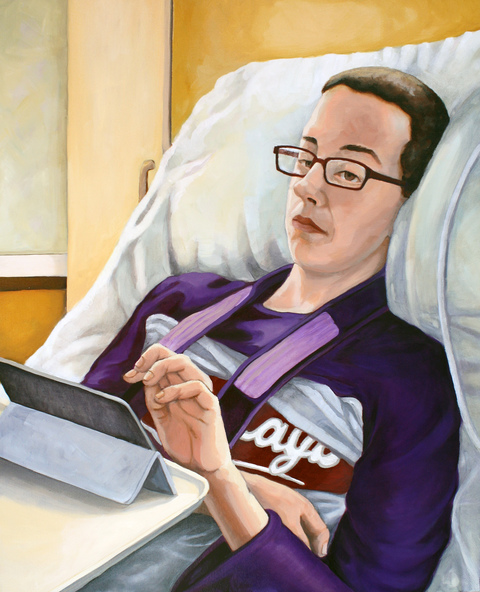 Lars was born with a predisposition disorder. When he was 2 years old his fine motor skills showed some defects. Then suddenly at the age of 16 he got a bump on his head that the doctor thought was a fat bump. Lars was disturbed by this bump and he was bullied with it at school. A cardiovascular surgeon removed his bump under local anesthesia and saw that it was attached to the nerves. She immediately made the link at NF and a new MRI showed that he had one tumor in the brain stem, one on and a larger older one outside. In total he had 19 tumors spread on the spiral cord and face. He walked into hospital for an urgent brain operation and came out with paralyzed hands and legs.TV and Facebook were his only outlet and even with this he needed help. Despite all this he remained optimistic with an indescribable humor. On November 1, 2014 he said goodbye to us with a very scared heart about what was to come.

NF changed the lives of his family forever. He wanted to be famous for 1 day and he succeeded. He was invited on a famous Belgian radio station. While the family was there the big boss saw him and asked to follow Lars for the rest of the day to make a newsflash. The radio station broadcasted to write Lars cards while he was in the hospital. He got about 4,000 cards in the rehabilitation clinic and also at home. Lars never left home for the rest of his days after it. Lars got letters from all over the world including the queen and king of Belgium as well as their army. His sister, who is three years older, was his mainstay, nurse and best friend as well as his dog Pepa who rode everywhere on the rock chair. Lars was a NF2 warrior.
NF2 Memorials
Loading...